I encountered a disemboweled ice cube between china town and the east village, but it was too expensive to bring home to brooklyn. I can no longer afford old things, because aged goods have increased in price and the new stuff is too much too. So I search for the discards….the free……the treasures in the trash….since that’s all I can achieve with what little I’ve got.

Often, when I find money on the street, I leave it there, knowing even though my wallet is mostly full of love notes and directions, there are others without even that.

An almost-lover I once had mailed me a book without her name attached. I couldn’t figure out who had sent it to me. By the time I realized who it was from, she was no longer accepting my phone calls.

An occasional lover sent me a different book, which I had a difficult time reading, but maybe I’m just not smart enough for Proust; what do you think?

The one I now love collects keys and coins; I collect guilt and memories, bruised like pocketed fruit.

Who should we put on that $10 bill, Rebel? I vote for Lidia Yuknavitch. Or Kathy Acker. Or Audre Lorde. And why stop at the ten dollar bill?

Rebel, I’m thinking about putting my words into melted copper and nickel; then, I can pay with my collection of syllables. As long as I read and collect more words, I will never be poor again. I will horde dictionaries and thesauruses. I will play Scrabble every night to encourage the long and obscurely short words. Then, we can collide again and finally find that yurt and live off the earnings of our speech.

Experiment #362: Go to your book shelf. If you have a designated poetry section, go there. If not, well, quickly make one, alphabetize according to author and pause. Perhaps it is time to introduce a new book to your shelves. Go to your “H” section. Can you make some room?

Take a deep breath. (I always do when I purchase something on the Internet).

Next, I want you to email me. Nothing fancy. Just something like: Hey, I bought it. OR: Did what you said, now what?

In your email, give me your address and I will send you a personalized letter. I know what you’re thinking: I’m going to put you on some mailing list. Nope. Or I’m hoarding addresses to publish in well-trafficked bathrooms. Ummm…..nope.

I think there is nothing more intimate than giving away one’s handwriting. (OK…..maybe there are a few other more intimate things….) Taking the time to use ink or lead to write words on paper, stuff into envelope, with a stamp! and then mail it??!?!?!

After you purchase a copy of my book, I will write you a REAL letter. A good one. With lots of words on a handmade card. And a stamp, of course.

Looking forward to hearing from you!

I have recently acquired a sweater with the most beautiful emblem on it, representing all I believe in, celebrate and practice. This blue and white image is like the rainbow I secretly hope to appear in the sky after each warm rainstorm. It is the signifier of hope, patience and art of writing in this country. 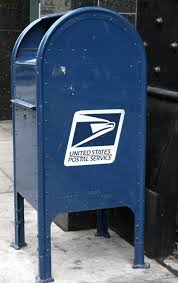 Beyond writing letters (almost) each day, I find comfort when I spot a curvy, blue mailbox to slip my envelopes inside. It reminds me that I am not only being encouraged to write, but how dedicated these postal workers are, traveling all over to empty these boxes and bring them to the chosen addressee.

I have written 125 letters to one particular human for the past six months. When I mentioned recently to someone that we live nearby and often see each other, they asked: So, what do you write in your letters? What is left to say?

I mentioned that I never plan out my sentences. I write what I see. How I feel in that moment. I write about the pigeon hopping along on three feet with what looks like bed head, staring me down as I eat a pretzel. When I crumble a few bits of it and toss it onto the ground, I write about how it pecks at it, then walks away. Perhaps the pigeon expected it to have more flavor or bite. I write about the panic attack I have on the A train which follows me onto the 4 train. I write about the way in which I abruptly head above ground, toward a farmers market, breathing in the medicinal fume of local vegetables. I write about the man standing above me on a different commute and the envy I feel for his perfectly-fitting suit and how his tie looks crisper than mine. I write that I wish I could afford a tailored suit and how different fabric looks on a body, which it was measured just for.

My postal worker in Boulder, Colorado, where I lived for a few years, was named Rusty. I often greeted him, asking him about his day and thanking him for his dedication to his job.

It’s not easy delivering mail in rain, sleet, or snow. On the coldest days of the year or the hottest.

Postal workers are my heroes. They are thankless publishers, bringing handwriting and languages to worthy recipients.

Yes, they also deliver your bills and bad messages, but if you were to have a pen pal (or several), it makes the junk mail feel less lackluster.

Thank you to all those who go door-t0-door, filling up mailboxes across the world.

And find yourself a pen pal, if you haven’t already.

(I’ve always got room for one or two more!)

Last week, someone mailed me a book of Proust. As I slowly read it, I think that he and I could have been lovers because if his limbs are anything like the length of his sentences, I might be curious to learn how many times he could wrap them around me. He utilizes semi-colons like breaths. They keep happening. And between each one is oxygenated imagery.

I keep a folded piece of paper in my notebook full of addresses. And I keep track of every letter that I send, never waiting for one back. I just write. And mail. And write and send.

Humans are forgetting about paper. And pens. And stamps. And the beauty of envelopes like folded treasure chests. They are too often distracted by fancy phones and internet access. We text and skype and email and swipe faces to the left and right through online dating applications. But what about the mailboxes just outside our doors? What about scratched out words and the curvature of letters in inked handwriting. The lover who lays beside you…would you recognize their handwriting in an alphabetical line-up?

One of the most magical love affairs I found myself in began with letters. One summer of back-and-forth exchange of days, evenings, moon sightings. I wrote over forty letters that summer to one human, who reminded me that stories find their meaning when given to another. I wrote on scraps of tree bark found in Prospect Park, postcards, receipts, cardboard and leaves. I fell in love with this human through our matchmaker: the mailbox.

Tonight, I perform a piece full of letters. A letter to my cervix, to my breasts, my cellular structure, future lover, my body. In these letters, I find my way back into myself by unraveling stories, memory, sensations.

This is an evening featuring magnetic performances by poets, singers, and comedians. I’m not sure which category I fit in anymore. But I’ll be there with my letters. And my uke. This is all to celebrate The Inspired Word’s four year anniversary. This series has grown into a movement of collaborations, community and artistry. I am honored to be a part of this celebration.

My wise soul sister talks to me about the importance of connecting to words. Beyond just licking fingertips to flip pages. Beyond even the recognition of finding oneself within the lines.

She tells me that if I am moved, I should say something. As a writer, I know how solitary this process can be. A lot of thinking, cataloguing, noticing, noting. A lot of writing, typing, choosing to be alone over being with others. So when I am moved, inspired in such a way that I weep trees out of my body, then I should really let that writer know.

The first time I contacted a writer, I was living in Brooklyn (the first time). I recall sitting at my roommate’s communal computer, writing out the words that had been oozing out of me. I first read Kim Addonizio several years earlier after an older poet friend shared her work with me. When I picked her up again, I felt the reek of erotism from her poems pull at me. Even if she didn’t write back, I knew I had no choice but to write her. And. She wrote back.

A few years later, I was feeling ghostly. My body was sitting inside classrooms for an overpriced degree that just wasn’t doing it for me. It’s kind of like pursuing the most attractive person in a bar (or the most sober, cost-effective one with a rolling admission). And that person accepts you without hesitation. And you’re in. And you’re into each other.

Until their first word. And you notice their breath or odd jargon or or or. So, I was feeling uninspired and I sought out a writer/ performer/ beast I once saw in a land I used to live in. And this letter was long. And I wasn’t quite sure it would be answered. And. I heard back. This beast has been my mentor ever since.

Recently, I came across a writer who tore the hair out of my legs. This writer boiled my sweat and caused me to think even further about sexuality than I have been already. She turned me on, while also making me want to do the butterfly stroke inside my tears. I think about sending her a letter, but it just needs to be perfect…because what if I don’t get a letter back this time.

The thing is, it doesn’t matter. We need to be writing these letters. We need to tell these writers what we feel, the traffic accident on our bodies after reading their words.

If you wrote a poem or a sentence after reading something I wrote, I want to know. Because I am sitting in a metal chair, hunched over– occasionally aware that I should straighten my back– with a brown, borrowed blanket wrapped around my waist. I am typing on a computer held on a slab of wood, which was free because it was from the scrap pile at the hardware store on fifth avenue. I stained it red, then painted it in puffs of multi-colored paint on my rooftop, which is no longer mine because I no longer live at that particular address. To my right, is a see-through mug with earl grey tea interrupted with honey. To my left is a tall window illuminated by a string of purple lights purchased for $2 from my soul sister’s stoop sale. It is silent here, until I interrupt it with my voice or hear the slurp of tea plunge down my throat.

I could use a letter. I think we all could.